The first landmarks of the understanding of museum values in the history of Rietavas were formed by the princes Oginskis. In the 19th century, the last residence of this family in Rietavas was famous not only for the breakthrough of unique social reforms, educational, cultural, scientific, technical innovations, but also for its excellent collections of works of art, archeology, antique weapons, musical instruments, ornate music .

Various misfortunes have led many of these valuesto be embraced only in the twentieth century. All that remained in the wake of the global upheaval and cultural decline was found in museums, libraries, archives and private collections of larger cities. It is understood that these losses sharpened the life of Rietavas enlightenment and stimulated the determination to create preconditions for the reliable preservation and display of the history of the Rietavas region. 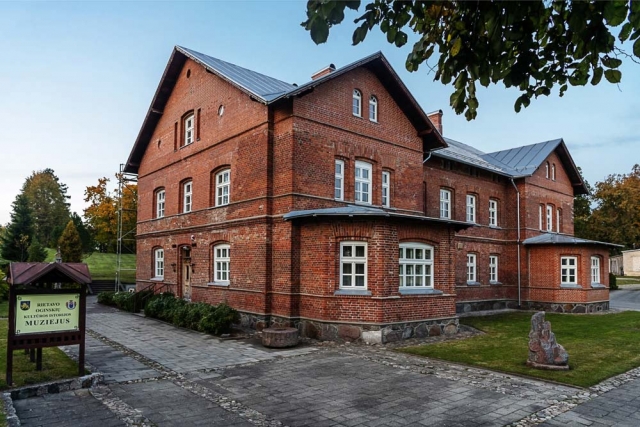 The idea of the Rietavas Museum was matured by several generations of culture promoters. Publications in archival publications, thematic notes in historical photographs, various correspondence documents testify to this. The life of the individual Rietavas enlighteners, teachers and lecturers, dedicated to the creation of public museums or at least museum campuses, also reminds the vitality of the idea.

Real preconditions for the development of a credible, long-term museum vision began to emerge only in 1990-1991. After the persevering efforts of Rietavas and the Lithuanian Light Society, during the Rebirth period, the decisive phase of the restoration of the long-delayed and ruined Bogdan Oginski School of Music began. After its completion, it was planned to establish a future museum here.

The main reconstruction and complicated restoration works were completed in 1999 and on July 24 the partial exposition of the III World Samogitian Art Exhibition under the aegis of the Samogitian Art Museum was opened here. People of Rietavas had direct access to paintings by Adam Galdikas, murals of Oginskiai history painted by Juozas Vosylius, and a collection of portraits of famous personalities. Since Rietavas belonged to the Plungė district at that time, the museum, which was just born, was granted the status of a branch of the Samogitian Art Museum.

Today the museum has the following expositions: Rietavas history, protests of the most famous Rietavas educators, Rietavas people – participants of national liberation and resistance struggles, Soviet occupation, archeological research of Rietavas manor, ethnography of Rietavas surroundings, and others.