The barn of A. Baranauskas

The granary of Lithuanian poet and linguist Antanas Baranauskas is one of the most interesting ethnographic and literary monuments of Anykščiai region. This is the first Lithuanian memorial museum. The barn was built in 1826. 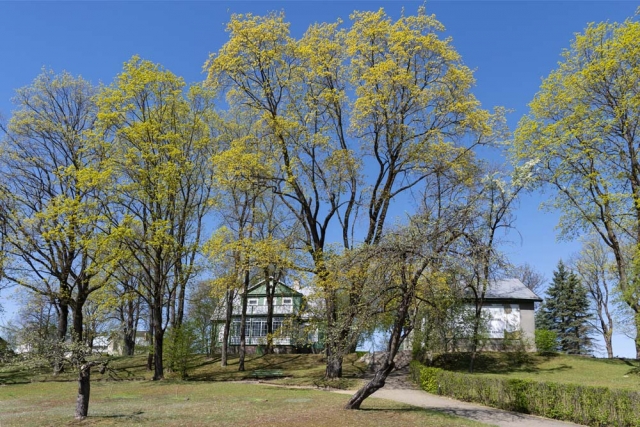 During the 19th century this barn primarily served the Baranauskas family as a farmhouse where linen, better clothes and household implements were stored. Until now, the granaries in the barn were filled with grain, and the simple bookkeeping of the farm was conducted by drawing chalk in the door jamb.

In the shelter of the barn, from which the best known Lithuanian literary work of the world spreads, authentic furniture, household items and books of A. Baranauskas and his family are now stored and displayed.

1904 after the death of Jonas Baranauskas, brother of the poet, Antanas Žukauskas-Vienuolis became the owners of the old Baranauskas homestead. He began to create a museum in the barn, which opened here in 1927 during spring time.

With the growing popularity of the barn as a museum, people began to carry personal items, documents and exhibits of the poet to the monk, not only about A. Baranauskas’ life, but also about the past of Anykščiai and the poet’s era. This is how the shelters, the piesta, appeared in the barn. And the monk took care of the restoration of the former interior, using so-called typological (of the same epoch) things: bought a blanket, a bedspread and a cover from T. Tutkiene; these fabrics now cover A. Baranauskas’ bed. P. Povilonis donated the sword, which, he said, belonged to the owner of Šlavėnai manor, friend of A. Baranauskas Gustav Brazauskas (Bozozowski), who participated in the 1863 war in rebellion. As an example of folk art, the monk placed the barn head of Baranauskas’ mother Teklė Baranauskienė, decorated with ornaments, and the oldest exhibit of the barn – the poet’s mother’s dowry chest “copper”. On it is a violin from B. Pavilonis (a relative of the prelate Antanas Pavilonis, a good acquaintance of A. Baranauskas).

The museum exhibits were heavily guarded by the monk, zealously collected, often reminding tourists with compassion that many valuable exhibits disappeared from the barn during the war: a stick described by Jonas Biliūnas, books with poet’s autographs.

The most important concern for the monk was how to protect the barn from weather changes. In his work plan for each year, the monk wrote, “take the whole barn under the glass.” Only in 1957 the construction of the protective enclosure was begun and completed in 1958, after the death of A. Vienuolis.

On the ground floor of the house there is an exposition reflecting the writer’s life and work, and on the second floor one can find memorial rooms. Interestingly, the workroom environment was left as it was on the day the writer died.